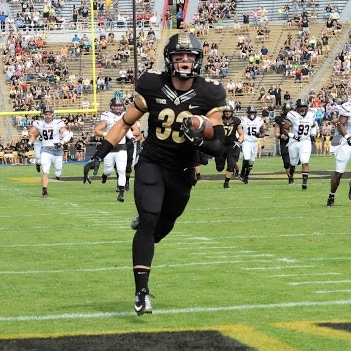 Episode #67 of the Dub Jellison Podcast with former Purdue Football Captain and former San Francisco 49ers Safety, Jake Thieneman! During Ep. #67, Dub and Jake discussed: - The charity work he did near the beginning of the pandemic surrounding ventilators. - The digital marketing company he and his business partner started. - His experiences in the NFL with the Giants, Colts and 49ers - Richard Sherman welcoming him to the league and his relationships with veterans including former Purdue running back Raheem Mostert. - His journey from being a walk-on at Purdue to becoming a team captain by the end of his career. - Playing both high school and college football alongside his brother Brennan - Advice he would give to walk-ons that are coming into college now. - The transition from Darrell Hazell to Jeff Brohm and the culture change that followed. - The impact that the late Tyler Trent had on him and the team during his senior season. Follow Jake on social media! Instagram: @jakethesnake_41 Twitter: @jaket_41 Follow the podcast and Dub on Instagram! @dubjellisonpodcast @dubjellison Link to streaming version of the podcast, social media and more via the DJP Linktree page! https://linktr.ee/dubjellisonpodcast Like, subscribe and share with your friends!